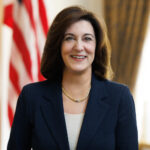 Victoria Reggie Kennedy serves as U.S. Ambassador to the Republic of Austria, promoting U.S. bilateral interests and priorities in Austria since January 12, 2022.  Ambassador Kennedy works to advance and strengthen the transatlantic relationship diplomatically, culturally and commercially, while emphasizing the engagement of young people and those from diverse backgrounds as well as the empowerment of women and girls.

Ambassador Kennedy has deep private sector experience in both law and business, as well as in the non-profit sector, in the areas of civic education, the arts, health care and gun violence prevention.  Prior to her appointment as Ambassador, she was a corporate attorney with an international law firm where she advised clients and devised strategies to help them resolve complex business problems and served on the Board of the Greater Boston (Massachusetts) Chamber of Commerce.  She also co-founded and serves as President Emerita of the Board of Directors of the Edward M. Kennedy Institute for the United States Senate, a non-profit organization in Boston, Massachusetts that educates the public about the U.S. system of government and works to inspire new generations of citizens and leaders. She served as an advocate for expanded medical research and access to health care for all Americans and actively promoted the passage of the Affordable Care Act of 2010.