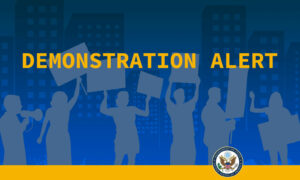 Location:  Announced gathering points include, but are not limited to, the following areas in Vienna’s 1st and 2nd Districts:

On Saturday, December 18, there will be a demonstration against COVID-19 mandatory vaccinations.  The demonstration is set to begin EITHER at 1 p.m. on the Graben pedestrian zone at the Pestaeule (Plague Column) near Stephansplatz, then proceed to the Constitutional Court, the Hoftburg, Balhausplatz and Theseus Temple; OR will be moved to Prater Park beginning at 6 p.m.  Vienna ordinances now prohibit demonstrations in business areas during opening hours, but some groups are calling for spontaneous gatherings in defiance of these ordinances. Expect heavy police presence and traffic obstructions.

On Sunday, December 19, there will be an event to commemorate the more than 13,000 Austrian citizens who have died of COVID-19, and to thank health care workers. The event is organized by the Catholic Church of Vienna.  Participants will gather on either side of the Ring Road beginning at 6:30 p.m. with a candlelight vigil and hold a minute of silence beginning at 7 p.m. Expect traffic and transit disruptions during this time.