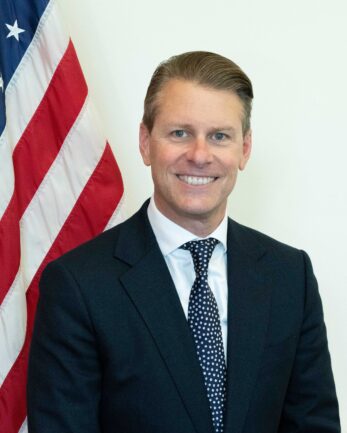 Mario Mesquita assumed his position as Chargé d’affaires ad interim of the United States Embassy in Austria on July 12, 2021. A career member of the Senior Foreign Service, Mr. Mesquita joined the State Department in 1998. His most recent assignment was as Managing Director for Visa Services in the Bureau of Consular Affairs, where he served from 2018 to 2020.

His previous assignments include service as Country Coordinator for Visas in Mexico City from 2015 to 2018, and as Deputy Chief of Mission and Chargé d’affaires at the U.S. Embassy to the Holy See from 2011 to 2014. He has also served at U.S. embassies in Prague, Warsaw, and Bogota. In Washington, Mr. Mesquita has worked for the Secretary of State as Deputy Director of the Executive Secretariat Staff, as a Senior Watch Officer in the State Department Operations Center, and in the Bureau of European and Eurasian Affairs.

Mr. Mesquita is originally from Sacramento, California, and is a graduate of the University of California at Davis where he studied Political Science. He speaks German, Spanish, and Italian, as well as some Czech and Polish.