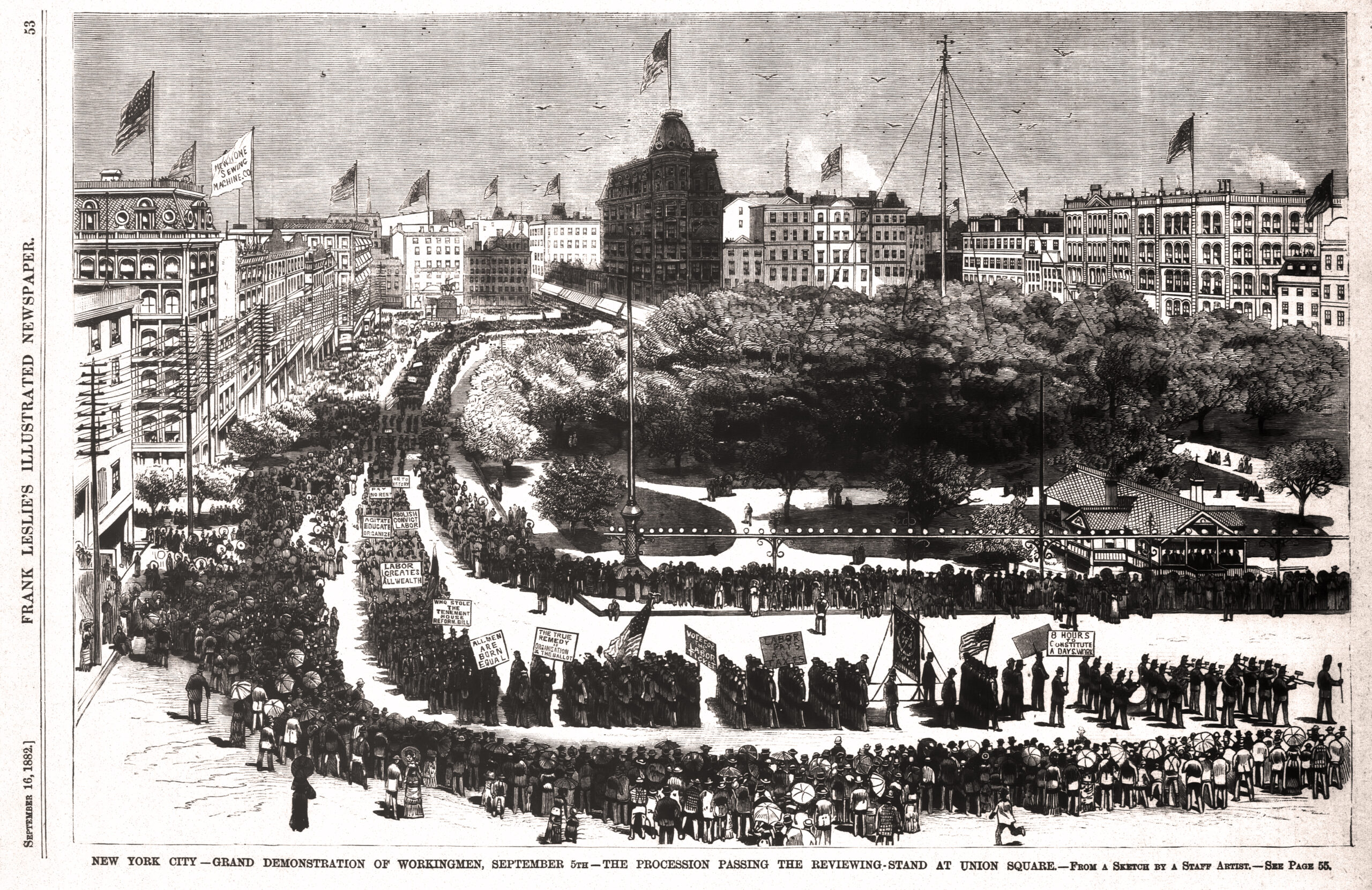 Eleven-year-old Peter McGuire sold papers on the street in New York City. He shined shoes and cleaned stores and later ran errands. It was 1863 and his father, a poor Irish immigrant, had just enlisted to fight in the Civil War. Peter had to help support his mother and six brothers and sisters.

Many immigrants settled in New York City in the nineteenth century. They found that living conditions were not as wonderful as they had dreamed. Often there were six families crowded into a house made for one family. Thousands of children had to go to work. Working conditions were even worse. Immigrant men, women and children worked in factories for ten to twelve hours a day, stopping only for a short time to eat. They came to work even if they were tired or sick because if they didn’t, they might be fired. Thousands of people were waiting to take their places.

When Peter was 17, he began an apprenticeship in a piano shop. This job was better than his others, for he was learning a trade, but he still worked long hours with low pay. At night he went to meetings and classes in economics and social issues of the day. One of the main issues of concern pertained to labor conditions. Workers were tired of long hours, low pay and uncertain jobs. They spoke of organizing themselves into a union of laborers to improve their working conditions. In the spring of 1872, Peter McGuire and 100,000 workers went on strike and marched through the streets, demanding a decrease in the long working day.

This event convinced Peter that an organized labor movement was important for the future of workers’ rights. He spent the next year speaking to crowds of workers and unemployed people, lobbying the city government for jobs and relief money. It was not an easy road for Peter McGuire. He became known as a “disturber of the public peace.” The city government ignored his demands. Peter himself could not find a job in his trade. He began to travel up and down the east coast to speak to laborers about unionizing. In 1881, he moved to St. Louis, Missouri, and began to organize carpenters there. He organized a convention of carpenters in Chicago, and it was there that a national union of carpenters was founded. He became General Secretary of the United Brotherhood of Carpenters and Joiners of America.

The idea of organizing workers according to their trades spread around the country. Factory workers, dock workers and toolmakers all began to demand and get their rights to an eight-hour workday, a secure job and a future in their trades. Peter McGuire and laborers in other cities planned a holiday for workers on the first Monday in September, halfway between Independence Day and Thanksgiving Day.

On September 5, 1882 the first Labor Day parade was held in New York City. Twenty thousand workers marched in a parade up Broadway. They carried banners that read “LABOR CREATES ALL WEALTH,” and “EIGHT HOURS FOR WORK, EIGHT HOURS FOR REST, EIGHT HOURS FOR RECREATION!” After the parade there were picnics all around the city. Workers and celebrants ate Irish stew, homemade bread and apple pie. At night, fireworks were set off. Within the next few years, the idea spread from coast to coast, and all states celebrated Labor Day. In 1894, Congress voted it a federal holiday.

Today we celebrate Labor Day with a little less fanfare on the first Monday of September. Some cities have parades and community picnics. Many politicians “kick off” their political campaigns by holding rallies on the holiday. Most Americans consider Labor Day the end of the summer, and the beaches and other popular resort areas are packed with people enjoying one last three-day weekend.