“We will not resort to violence.  We will not degrade ourselves with hatred.  Love will not be returned with hate.” (Dr. Martin Luther King, Jr.) 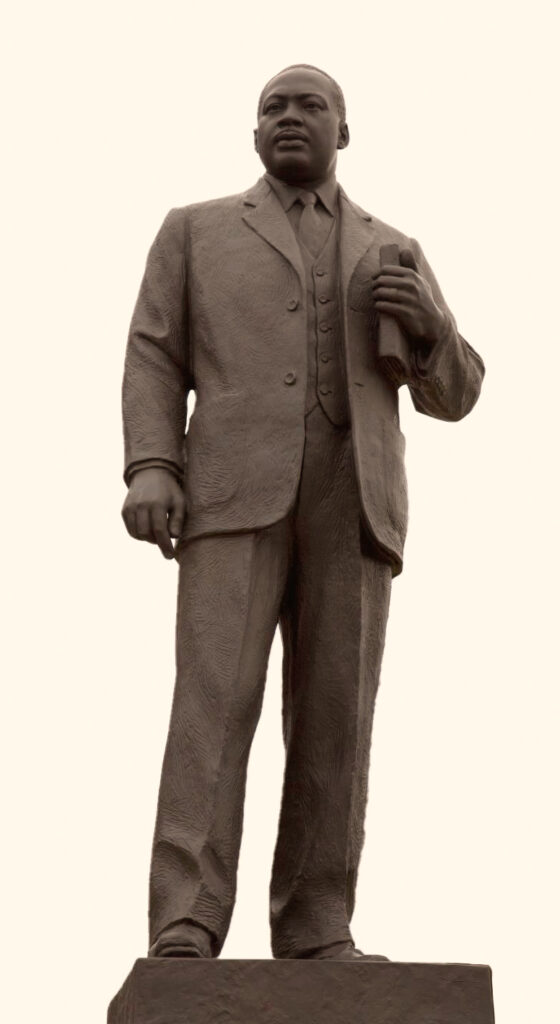 It was December, 1955, and Martin Luther King, Jr. had just received his doctorate degree in theology. He had moved to Montgomery, Alabama to preach at a Baptist church. He saw there, as in many other southern states, that African-Americans had to ride in the back of public buses. Dr. King knew that this law violated the rights of every African-American. He organized and led a boycott of the public buses in the city of Montgomery. Any person, black or white, who was against segregation refused to use public transportation. Those people who boycotted were threatened or attacked by other people, or even arrested or jailed by the police. After 382 Days of boycotting the bus system, the Supreme Court declared that the Alabama state segregation law was unconstitutional.

African-Americans were not only segregated on buses throughout the south. Equal housing was denied to them, and seating in many hotels and restaurants was refused.

In 1957, Dr. King founded the Southern Christian Leadership Conference and moved back to his home town of Atlanta, Georgia.  This
was the beginning of the Civil Rights Movement. In the years following, he continued to organize non-violent protests against unequal treatment of African-American people. His philosophy remained peaceful, and he constantly reminded his followers that their fight would be victorious if they did not resort to bloodshed. Nonetheless, he and his demonstrators were often threatened and attacked. Demonstrations which began peacefully often ended up in violence, and he and many others were often arrested.

On August 28, 1963, a crowd of more than 250,000 people gathered in Washington, D.C. and marched to the Capitol Building to support the passing of laws that guaranteed every American equal civil rights. Dr. Martin Luther King, Jr. was at the front of the “March on Washington.”  On the steps of the Lincoln Memorial that day, Dr. King delivered a speech that was later entitled “I Have a Dream.” The March was one of the largest gatherings of black and white people that the nation’s capital had ever seen… and no violence occurred.

One year later, the Civil Rights Act of 1964 was passed. It was not the first law of civil rights for Americans, but it was the most thorough and effective. The act guaranteed equal rights in housing, public facilities, voting and public schools. Everyone would have impartial hearings and jury trials. A civil rights commission would ensure that these laws were enforced. Dr. Martin Luther King, Jr. and thousands of others now knew that they had not struggled in vain. In the same year Dr. King won the Nobel Peace Prize for leading non-violent demonstrations.

In 1968, Dr. Martin Luther King, Jr. was assassinated while he was leading a workers’ strike in Memphis, Tennessee. White people and black people who had worked so hard for peace and civil rights were shocked and angry. The world grieved the loss of this man of peace.

The following is an excerpt from the speech entitled “I Have a Dream,” delivered by Dr. Martin Luther King, Jr. on the steps of the Lincoln Memorial on August 28, 1963.

I say to you today, my friends, that in spite of the difficulties and frustrations of the moment I still have a dream. It is a dream deeply rooted in the American dream. I have a dream that one day this nation will rise up and live out the true meaning of its creed: “We hold these truths to be self-evident; that all men are created equal.”

I have a dream that one day even the state of Mississippi, a desert state sweltering with the heat of injustice and oppression, will be transformed into an oasis of freedom and justice.

I have a dream today.

I have a dream that one day the state of Alabama … will be transformed into a situation where little black boys and black girls will be able to join hands with little white boys and white girls and walk together as sisters and brothers.

I have a dream today.

This will be the day when all of God’s children will be able to sing with new meaning “My country ’tis of thee, sweet land of liberty, of thee I sing. Land where my fathers died, land of the pilgrim’s pride, from every mountainside, let freedom ring.”

And if America is to be a great nation this must become true. So let freedom ring from the prodigious hilltops of New Hampshire.

Let freedom ring from the mighty mountains of New York.

Let freedom ring from the heightening Alleghenies of Pennsylvania!

Let freedom ring from the snowcapped Rockies of Colorado!

Let freedom ring from the curvaceous peaks of California!

But not only that; let freedom ring from Stone Mountain of Georgia!

Let freedom ring from every hill and mole hill of Mississippi.

From every mountainside, let freedom ring.

The Making of a Holiday

Dr. Martin Luther King, Jr.’s death did not slow the Civil Rights Movement. Black and white people continued to fight for freedom and equality. Coretta Scott King is the widow of the civil rights leader. In 1970, she established the Martin Luther King Jr. Memorial Center in Atlanta, Georgia. This “living memorial” consists of his boyhood home and the Ebenezer Baptist Church, where King is buried.

On Monday, January 20, 1986, in cities and towns across the country people celebrated the first official Martin Luther King Day, the only federal holiday commemorating an African-American. A ceremony which took place at an old railroad depot in Atlanta Georgia was especially emotional. Hundreds had gathered to sing and to march. Many were the same people who, in 1965, had marched for fifty miles between two cities in the state of Alabama to protest segregation and discrimination of black Americans.

All through the 1980’s, controversy surrounded the idea of a Martin Luther King Day. Congressmen and citizens had petitioned the President to make January 15, Dr. Martin Luther King, Jr.’s birthday, a federal holiday. Others wanted to make the holiday on the day he died, while some people did not want to have any holiday at all.

January 15 had been observed as a public holiday for many years in 27 states and Washington, D.C. Finally, in 1986, President Ronald Reagan declared the third Monday in January a federal legal holiday commemorating Dr. Martin Luther King’s birthday.

Schools, offices and federal agencies are closed for the holiday. On Monday there are quiet memorial services as well as elaborate ceremonies in honor of Dr. King. On the preceding Sunday, ministers of all religions give special sermons reminding everyone of Dr. King’s lifelong work for peace. All weekend, popular radio stations play songs and speeches that tell the history of the Civil Rights Movement. Television channels broadcast special programs with filmed highlights of Dr. King’s life and times.