We celebrate Thanksgiving along with the rest of America, maybe in different ways and for different reasons. Despite everything that’s happened to us since we fed the Pilgrims, we still have our language, our culture, our distinct social system. Even in a nuclear age, we still have a tribal people.” 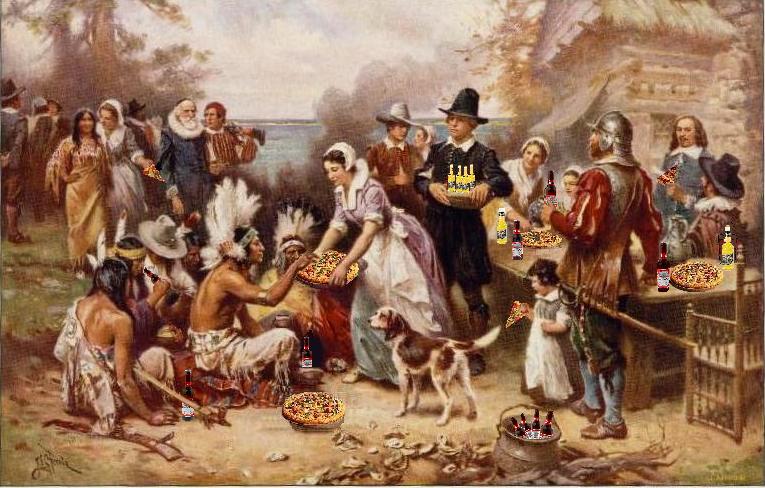 Almost every culture in the world has held celebrations of thanks for a plentiful harvest. The American Thanksgiving holiday began as a feast of thanksgiving in the early days of the American colonies almost four hundred years ago.

In 1620, a boat filled with more than one hundred people sailed across the Atlantic Ocean to settle in the New World. This religious group had begun to question the beliefs of the Church of England and they wanted to separate from it. The Pilgrims settled in what is now the state of Massachusetts. Their first winter in the New World was difficult. They had arrived too late to grow many crops, and without fresh food, half the colony died from disease. The following spring the Iroquois Indians taught them how to grow corn (maize), a new food for the colonists. They showed them other crops to grow in the unfamiliar soil and how to hunt and fish.

In the autumn of 1621, bountiful crops of corn, barley, beans and pumpkins were harvested. The colonists had much to be thankful for, so a feast was planned. They invited the local Indian chief and 90 Indians. The Indians brought deer to roast with the turkeys and other wild game offered by the colonists. The colonists had learned how to cook cranberries and different kinds of corn and squash dishes from the Indians. To this first Thanksgiving, the Indians had even brought popcorn.

In following years, many of the original colonists celebrated the autumn harvest with a feast of thanks. After the United States became an independent country, Congress recommended one yearly day of thanksgiving for the whole nation to celebrate. George Washington suggested the date November 26 as Thanksgiving Day. Then in 1863, at the end of a long and bloody civil war, Abraham Lincoln asked all Americans to set aside the last Thursday in November as a day of thanksgiving*.

Turkey, corn (or maize), pumpkins and cranberry sauce are symbols which represent the first Thanksgiving. Now all of these symbols are drawn on holiday decorations and greeting cards. The use of corn meant the survival of the colonies. “Indian corn” as a table or door decoration represents the harvest and the fall season.

Sweet-sour cranberry sauce, or cranberry jelly, was on the first Thanksgiving table and is still served today. The cranberry is a small, sour berry. It grows in bogs, or muddy areas, in Massachusetts and other New England states. The Indians used the fruit to treat infections. They used the juice to dye their rugs and blankets. They taught the colonists how to cook the berries with sweetener and water to make a sauce. The Indians called it “ibimi” which means “bitter berry.” When the colonists saw it, they named it “crane-berry” because the flowers of the berry bent the stalk over, and it resembled the long-necked bird called a crane. The berries are still grown in New England. Very few people know, however, that before the berries are put in bags to be sent to the rest of the country, each individual berry must bounce at least four inches high to make sure they are not too ripe!

In 1988, a Thanksgiving ceremony of a different kind took place at the Cathedral of St. John the Divine. More than four thousand people gathered on Thanksgiving night. Among them were Native Americans representing tribes from all over the country and descendants of people whose ancestors had migrated to the New World. The ceremony was a public acknowledgment of the Indians’ role in the first Thanksgiving 350 years ago. Until recently most schoolchildren believed that the Pilgrims cooked the entire Thanksgiving feast, and offered it to the Indians. In fact, the feast was planned to thank the Indians for teaching them how to cook those foods. Without the Indians, the first settlers would not have survived.