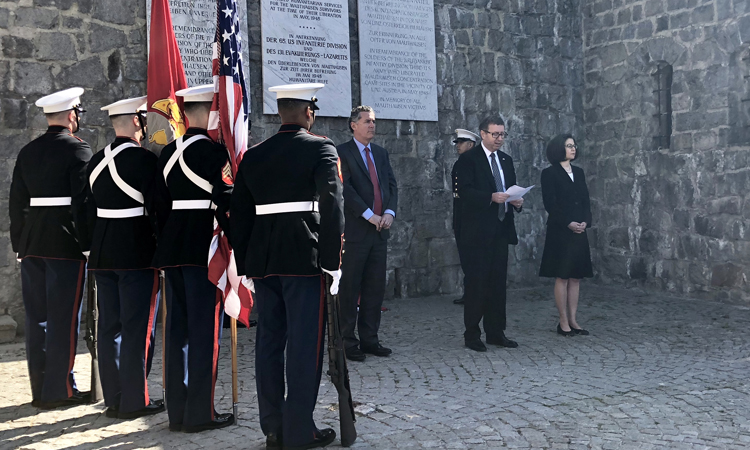 Proud to see so many Americans here today and to be here with Chargés, Colonel Knych, and Marines.

A wise philosopher once urged us to “Remember the past to build the future.” Here at Mauthausen, where evil in its most horrifying form existed, we rededicate ourselves to ensuring we never forget the past. We rededicate ourselves to preventing others from forgetting, so that we may build a future in which the dignity and rights of each and every person are respected, and protected.

Words cannot adequately describe the inhumanity inflicted upon innocent victims in places like Auschwitz, Dachau, Mauthausen. But language gives shape to memory. It builds the foundation for remembrance. It allows us to commemorate those who perished, so that in remembering them we commit ourselves to building a future that will honor them and their descendants; indeed, all of humanity.

The American soldiers of the United States Third Army who liberated this camp on May 5, 1945, could not have been prepared for what they witnessed here. What they saw when they entered the camp must have shaken them to their very core. Yet they completed their grim task, freed the camp, and struck a blow for liberty that reverberated across this country, the continent, and the world.
Those Americans were fighting for a just cause. They were fighting to end one of the worst tyrannies humankind has known. They helped end the notion that one man or woman is better than another because of his or her race, religion, skin color, or national origin.