From August 21 to 28, the University of Technology Vienna (TU Wien) hosted a summer school on ”Smart Cities – Designing Places and Urban Mentalities” with grant support from the U.S. Embassy Vienna, among others. Aside from classroom lectures, the summer school also included executive workshops as well as public lectures. One of those was delivered by Harvey Molotch, Professor of Sociology, New York University, who on August 25 spoke about “City Cultures: From Greenwich Village to Abu Dhabi” at Amerika Haus Vienna before an audience of more than 130 people. Following introductory remarks by U.S. Cultural Attaché Kellee Farmer and TU Wien Vice-Rector Kurt Matyas, Professor Molotch in his remarks compared two urban models, the Greenwich Village model with its face-to-face neighborhood interaction, and the Abu Dhabi model, which stands for sprawling, modern cities built with a plan. In reference to the late American-Canadian journalist, author and urban activist Jane Jacobs, Molotch identified a number of defining features for the Greenwich Village model: the power of accidental, serendipitous encounter; diversity; and proximity. While Greenwich Village, in Molotch’s view, constitutes a highpoint for architectural participation, the Abu Dhabi model manifests just the opposite. Molotch went on outlining the historical development of Abu Dhabi and touching on the current political situation in this part of the middle-East before describing the challenges that topography, climatic conditions but also (tribal) culture have caused for the development of this and other major cities in the region. In closing, Molotch introduced a new building project currently under way in Abu Dhabi which aims at zero emission and zero energy consumption and is carried out in cooperation with Sir Norman Foster and the Massachusetts Institute of Technology (MIT.) Following the end of his talk, the speaker answered numerous questions from the audience of primarily TU Wien students. 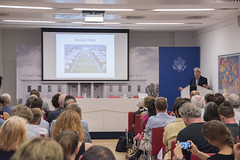