Hans Noel, co-author of “The Party Decides”, an influential book on presidential nominations, participated in a panel discussion on how the 2016 election is changing how political scientists view nominations, and what scholars expect to happen on Election Day. At Georgetown University Professor Noel teaches and researches on parties, elections, political history and political methodology.  He was joined by Arno Scharl from the Department of New Media Technology at MODUL University Vienna. Mr. Scharl presented the US Election 2016 Web Monitor, a big data and Web intelligence platform to track the presidential candidates’ performance on the campaign trail. 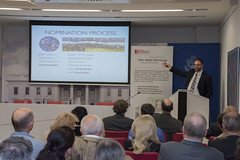