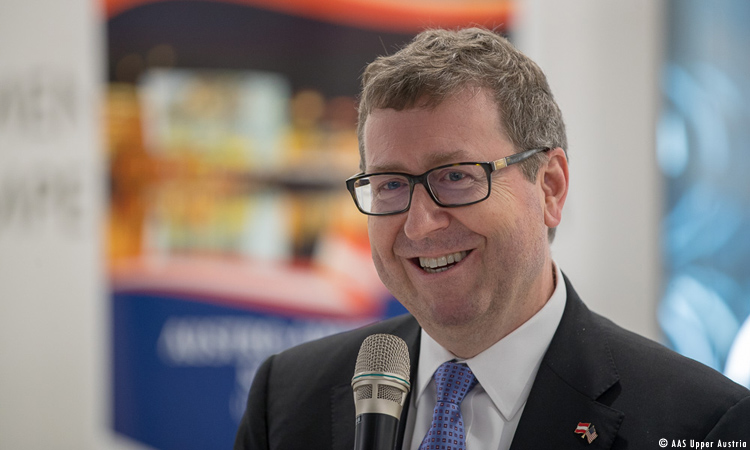 On February 6, Chargé d’Affaires Eugene Young travelled to Upper Austria to open the “70 Years Marshall Plan” anniversary exhibit at Oberbank Linz.  In his remarks, Chairman of the Board Dr. Josef Weißl underlined the importance of the Marshall Plan as a landmark economic initiative, which Secretary of State George C. Marshall had first introduced in June 1947, and from which Austria started to benefit as of 1948.  Dr. Weißl also mentioned how Oberbank as the first regional bank in Austria was tasked with managing ERP loans as early as 1949 and continues to act in that capacity to this day.

Chargé d’Affaires Young commended Austria on its reputation as a reliable partner for implementing the Marshall Plan. Making reference to the large number of Upper-Austrian companies that have received assistance, he quoted U.S. President Lyndon B. Johnson, who as early as 1966 spoke favorably of the spirit and energy the Austrian people had displayed in rebuilding their country.

The anniversary exhibit is one of several initiatives, including an online teaching tool, a video contest, and a lecture series that the Embassy has launched in cooperation with its project partners austria wirtschafts service and Austrian Marshall Plan Foundation.  The goal of the campaign during the current anniversary year is to introduce young Austrians, in particular, to the important role the Marshall Plan and the ERP Fund continues to play for Austria’s economic development and prosperity.  The exhibit continues to be shown at Oberbank LinzNord’s handsome new premises through February 26 before travelling to Innsbruck and Klagenfurt.

When Secretary of State George C. Marshall in June 1947, in his famous speech at Harvard University, laid out his vision to help the war-ravaged nations of Europe recover from hunger, poverty, and chaos, he called for a massive relief program.  With the European Recovery Program (ERP), which came to bear his name as the “Marshall Plan,” he sought to both rebuild the continent’s infrastructure and institutions, and to restore hope and confidence for the people of Europe.

Marshall’s bold thinking played a critical role in fostering reconciliation and cooperation among countries that were previously enemies on the battlefield.  His plan not only helped Europe recover and spur rapid economic growth; it laid the foundation for the long-term prosperity that both the United States and Europe have enjoyed in the decades since.

In Austria, which became the second-largest per capita beneficiary of Marshall Plan money, funds began to flow in 1948.  With time, the program would support a wide array of reconstruction and development projects, ranging from tourism to infrastructure and technology improvement.

Upper Austria, located primarily in the American zone at that time, benefitted particularly when it came to economic reconstruction.  The reason was that conditions were favorable here and many businesses had decided to relocate to Upper Austria from the Soviet zone in eastern Austria. I met someone recently whose mother lived in the Soviet zone and worked in the American zone. For us today it is hard to imagine, that she had to cross an “international border” every day.

Oberbank became the first regional bank – and the fourth bank in Austria –  tasked with managing ERP loans.  I could not think of a better place for the Marshall Plan exhibit to be shown than here, in Oberbank’s building in Linz.  Thank you again, Dr. Weißl, for making your “house” available to help us share the story of this landmark initiative with the people of Upper Austria.

Many other companies and businesses in Upper Austria benefited from ERP loans.  From early recipients such as Lenzing AG, Fischer Ski in Ried im Innkreis, and Joka Bettenwerke in Schwanenstadt, to more recent ones such as Pöttinger agricultural technology of Taufkirchen, or EV Group, a high-tech company based in St. Florian am Inn, Marshall Plan help always proved to be the key to modernization and growth.

I also met a very senior Austrian executive last year whose uncle had a hotel in Gmunden. He received a visit from an American tourism expert through the Marshall Plan; together they discussed how the hotel’s business could be improved.

When President Van der Bellen spoke at the 70th anniversary event at META Stadt last June, the organizers put up a photo of an irrigation project in Kaunertal, where he grew up.

While orchards didn’t grow as intended, everyone in Kaunertal still remembers, that the project was financed with Marshall Plan funds, as does President Van der Bellen, who likes to take walks on the meadows there.

The exhibit you can see here, which was first shown at the 70th anniversary event, is based on work by Günter Bischof and Hans Petschar, who put out a formidable new book about the Marshall Plan in Austria.

Since 1962, when ERP funds were turned over to the Austrian Government, the austria wirtschafts service, which acts as the umbrella organization for legacy ERP funds, has continued to provide loans from this now €3 billion fund.  Over € 500 million annually are invested in innovation across a diverse array of industries, from tourism to high tech, to cutting-edge research.

In this way, over the decades, ERP funds have continued to create jobs and economic expansion.  That has benefitted not only Austria but also Europe and the United States, one of Austria’s leading trade and investment partners.  Think of VÖEST Alpine, which received ERP loans for refurbishing their plant here in Linz after World War Two.  Today, the VÖEST Alpine plant in Portland, Texas, which was built in 2016, is a major employer in that region.  It produces steel in Texas that is then further processed into high-quality steel products here in Austria! That’s synergy.  That’s partnership.  That’s success.

The United States cannot take sole credit for the Marshall Plan’s success.  In fact, it really was an example of collaboration in the purest sense, with local know-how being as important as the original financial support.

As early as 1966, President Lyndon Johnson spoke admiringly of the Austrian post-war reconstruction: “While the Marshall plan did help provide some of the financial resources that were needed during that time, we know that the real heart of this effort–the backbone of it all–was the strength, the fortitude, and the endurance of the Austrian people. We stood here and watched with great admiration as they transformed the ruins of war into a modern and prosperous nation. We did try to help where we could and when we could. But the spirit and the energy which rebuilt your cities and factories and roads and schools were yours.”

Less than 20 years after Marshall Plan help kicked in in Austria, the remarkable progress the country had made was already visible.

You should be very proud of everything Upper Austria, Austria and Europe have achieved through its Marshall Plan investments.  I know I am.

For good measure, I would also like to mention the educational component to ERP help:  In the 1960s, funds were designated to support the Fulbright program, the U.S. Government’s most prestigious academic exchange program.  Since its inception in Austria in 1951, the Fulbright program has facilitated the exchange of over 6,000 students, researchers, and teachers between the U.S. and Austria, with  ERP money still at the core of Fulbright Austria’s endowment.

And in 1997, ERP funds created the Austrian Marshall Plan Foundation, which supports educational exchange between Austria and the United States and provides opportunities for people to meet and make personal contact.

The spirit of the Marshall Plan lives today in our – Europe and America’s – common approach to challenges around the world be they economic, social, political or military.  Do we agree on everything?  No.  Are we family that support and reinforce each other on the most important issues?  Yes, absolutely – freedom,  democracy, open economy, human rights, are our shared values.

Here I should like to acknowledge the presence of Prokurist Matthias Bischof, of austria wirtschafts service, and Executive Director Markus Schweiger, of the Austrian Marshall Plan Foundation.  Both organizations have been superb partners for all our initiatives in connection with the Marshall Plan anniversary.

Thank you again, gentlemen, for the great cooperation.

Here’s a brief rundown of what we are doing this year:  aside from the Marshall Plan exhibit, which aws commissioned and the Embassy helps place throughout Austria, there is a teaching tool for Austrian teachers and students to educate young Austrians about the Marshall Plan and its ongoing success.  We have also launched a video contest for high school students where they can present their ideas about the Marshall plan and win prizes.   And, there will be a lecture series at Amerika Haus in Vienna to further explore the partnership dimensions of the Marshall Plan.

I encourage the teachers and students among you to, please, take a look at the teaching tool.  And do consider participating in our video contest.  My colleagues here from Public Affairs, Dr. Daniel Mattern and Mag. Karin Schmid-Gerlich, can tell you more.

Before I close, I would like to underscore the important role the Austro-American Society of Upper Austria has played in sharing information about the United States.  Yours has been a particularly active chapter of this important US-Austrian friendship society from the start.  It is organizations such as yours that help us tell America’s story day in and day out.  Your contribution to fostering friendship between our countries simply cannot be overstated.

Our thanks go to you, Dr. Weißl, for your leadership, to the officers of the Society for your ongoing dedication, and to all members for your continued interest and your support.

At the American Embassy, we look forward to building on the fruitful relationship that we have established, and to working with you to promote intercultural exchange and further cooperation between our two countries. 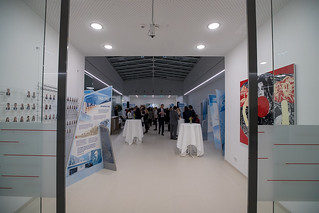