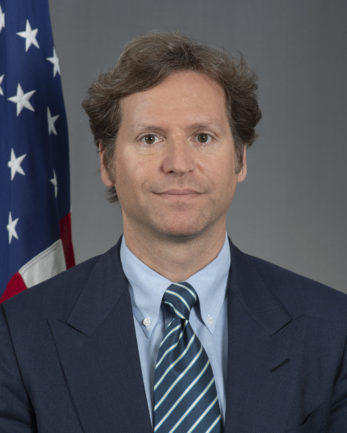 On January 22, 2018, President Donald J. Trump nominated Trevor D. Traina of California to be United States Ambassador to the Republic of Austria.  Ambassador Traina was confirmed by the United States Senate on March 22, 2018, and was sworn in on March 29, 2018.  He arrived in Austria on May 18, 2018, and presented his credentials to Austrian President Alexander Van der Bellen on May 24, 2018.

Ambassador Traina served on many charitable boards including the Haas School of Business at the University of California Berkeley, the Fine Arts Museums of San Francisco, the Princeton University Art Museum, the Gladstone Institute for Medical Research, San Francisco’s Grace Cathedral, and Venetian Heritage.  He also previously served on the board of the Dow Foundation, a $500 million family foundation, and on the City of San Francisco’s technology advisory council.

Ambassador Traina earned a bachelor’s degree from Princeton University and a special diploma in social studies from Saint Catherine’s College at Oxford in the United Kingdom.  He received a master’s degree in business administration from the Haas School of Business at the University of California, Berkeley.

Ambassador Traina is married to Alexis S. Traina.   They have two children.

Ambassador Traina in the Media