Dr. Davidson, thank you so much for that kind introduction.  And thank you for all you continue to do to nurture this program and the Austro-American relationship.

Rector Märk, Students, faculty, and staff of the UNO-Innsbruck International Summer School, Members of the of the Austro-American Society, Friends and colleagues,

Thank you so much for the kind invitation to be with you today.  When I arrived in Austria – just about seven months ago – I began hearing about the exceptionally strong ties between Innsbruck and New Orleans. As the U.S. Ambassador to Austria and as a Louisiana native who went to college and law school in New Orleans, I have been especially excited about this connection.  So, I am truly delighted to be here in Tyrol while the UNO-Innsbruck International Summer School is in session.

Over the course of the past few decades, the exchange between UNO and the University of Innsbruck has contributed in a very significant way to the U.S.-Austrian relationship.  10,000 Austrian and American students have participated since this program began 46 years ago. And that number grows exponentially when we look at the impact and influence of those 10,000 experiences on family, friends, work colleagues. You are all a part of a very special group. And you are having what I hope will be a transformative experience. 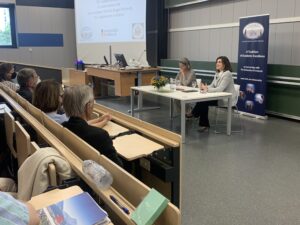 Relationships don’t happen overnight. They’re built brick-by-brick, year-by-year, person-to-person.  And your experiences here and the friendships you make form the backbone of the steadfast bilateral relationship between the United States and Austria.

As U.S. Ambassador, I am committed to strengthening and deepening that already strong bilateral relationship.  The United States and Austria have shared values and common interests that connect us diplomatically, commercially, and culturally.

But the strong relationship between our countries didn’t happen by accident.  Consider, for example, the Marshall Plan, envisioned 75 years ago by the genius of the famed U.S. Secretary of State George C. Marshall, shortly after the end of World War II.  As outlined by Marshall, the European Recovery Plan – which came to be known as the Marshall Plan – was intended to hasten “the return of normal economic health in the world.”  Marshall believed that without that economic health, there would be no political stability and no assured peace.

The outcome of the Marshall Plan has been nothing less than revolutionary.  Through an extraordinary investment in Europe’s democratic future, it spurred the rehabilitation of economies across the continent and created stable conditions for democratic institutions not only to survive, but also eventually to thrive.

Those institutions and values are fundamental to the identity of modern-day Europe, and they’re also an essential bond in the deep relationship between our countries.  It’s worth noting that, on a per capita basis, Austria benefited more from the Marshall Plan than most of the other fifteen countries in the plan. Indeed, Marshall Plan funds are still contributing to the Austrian economy and its educational landscape.

The United States is committed to our relationship with Austria and to doing the work necessary to support lasting peace, security, and prosperity.  Let me tell you about some concrete steps we’ve taken in just the last few years:

In 2019, the United States and Austria began a Strategic Dialogue, and in 2022, we reaffirmed our mutual commitment to advancing our joint interests and common democratic future.

This Strategic Dialogue is both important and substantive, and we’ve made important strides to give life to our mutual commitments under it.

For example, just this this Spring, the United States and Austria signed a Memorandum of Understanding to share best practices on apprenticeship programs.  These programs are highly successful in Austria, pairing in-school education with hands on job training.  This apprenticeship MOU will highlight best practices learned here in Austria and, we believe, will further enhance our powerful bilateral trade and investment relationships.

How powerful is that trade and investment relationship? Very.  Austria is the second fastest growing foreign direct investor in the U.S.  Austrian companies employ about 35,000 Americans and add significantly to the US economy.  If any of you have ever enjoyed a Red Bull, just remember – that’s an Austrian company and they have a substantial presence in the United States.

U.S. companies also have a substantial presence in Austria.  There are the powerhouses, like Microsoft, Amazon, H-P, 3M, etc., all of which have major operations in Austria. And there are also smaller U.S. companies that are not household names, adding to the rich business landscape in Austria.

In addition to apprenticeship programs and trade and investment, the U.S. and Austria have committed to strengthening our relationship in other concrete ways.  Just this month, we celebrated the signing of a partnership agreement between the Vermont National Guard and the Austrian Armed Forces.  This collaboration elevates our bilateral security partnership to the next level as it focuses on disaster management, cybersecurity, mountain warfare training, and increased interoperability.

This is by no means a comprehensive list, but it gives you an idea of some of the important things we’ve achieved as the result of several decades of relationship building and cooperation between the United States and Austria.  And I can’t emphasize enough just how important this long-term investment in our bilateral relationship is.

Just think of the unified response to the February 24th invasion of Ukraine, an invasion that threatens the political and economic stability of the rules-based international order we’ve built together over the last 75 years.

I think it fair to say that Vladimir Putin’s unjustified, unprovoked attack on the sovereignty of Ukraine and his utter disregard for human rights and fundamental freedom, present the greatest threat to democratic principles and values the world has experienced since World War II.   Addressing this threat without our European allies and partners would be unthinkable.

Because we have such shared values and common interests, and because we have built trust with each other over generations, we stand in solidarity with likeminded countries – like Austria – to impose severe costs on Putin and his government as they try to tear at the fabric of democracy in Europe and threaten the very idea of a Europe “whole, free, and at peace”.

As this current conflict reminds us, the work to defend democracy is never ending. And complacency about the status quo is a luxury we cannot afford. We must work together to build the institutions that sustain the rule of law, and we must work together to support democratic principles when they are under attack.

So, we turn to you and your generation of Austrians and Americans to help nurture the Austro-American relationship into the future, and in the process, to help your nations to support democratic principles and values.

Whether you’re an Austrian student from right here in Innsbruck, or an American student who traveled across an ocean to get here, we need you.  The world needs you.

You are the future, not just of Austria and the United States, but of our enduring transatlantic bond.  So, thank you for all you’ve already done and for what you’re going to do in the future.

And thanks as well to the American faculty in this summer program and the Tyrol branch of the Austro-American Society.  You all are helping to forge the people-to-people connections that are essential to preserving and strengthening our bilateral relationship into the future.

I am grateful for the opportunity to be with you this afternoon.  I look forward to your questions and to having a great conversation with Dr. Davidson.

Thank you very much.