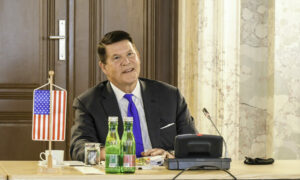 After U.S. Secretary of State Pompeo’s very productive and successful mid-August visit to Vienna, another senior U.S. Government official, Under Secretary of State for Economic Growth, Energy, and the Environment Keith Krach, arrived in Vienna for a series of talks. 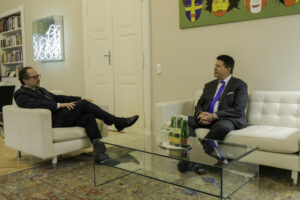 During his meeting with Foreign Minister Alexander Schallenberg at the Austrian Ministry of European and International Affairs, they discussed the strong bilateral relationship and the U.S.-Austria Strategic Dialogue. Under Secretary Krach also met with Director General for EU and Multilateral Affairs Ambassador Andreas Riecken and kicked off the Economic Component of the Strategic Dialogue. They discussed both countries’ commitment to expanding and strengthening our economic relations and safeguarding 5G and cybersecurity from high-risk vendors through the Clean Network and the EU 5G toolbox.

He stressed that Austria is one of the fastest growing commercial and investment partners for the United States.We will continue to spur growth, productivity, innovation, and job creation in both of our countries.“

Strengthening the strategic partnership between Austria and the United States is a top foreign policy priority listed in the Austrian government’s coalition agreement. The United States shares and fully supports this goal. Later in the day, Under Secretary Keith Krach met with Austrian Minister for Agriculture, Regions, and Tourism Elisabeth Köstinger. They discussed international cooperation in the post-COVID economic recovery, 5G cybersecurity, and the strong bilateral relationship between the United States and Austria.