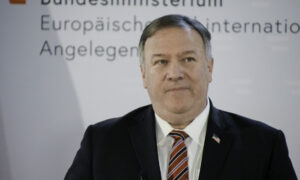 In the morning the Secretary participated in a business roundtable with Finance Minister Gernot Blümel, Ambassador Trevor Traina and representatives of Austrian companies with significant investments in the USA. 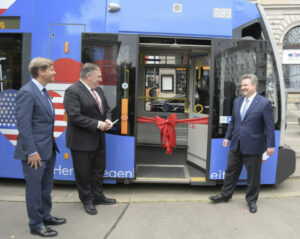 After this meeting he, together with Ambassador Traina and the City of Vienna Mayor Michael Ludwig, inaugurated one of the two U.S.-Austria Friendship Trams that will run on different lines. They are a symbol of the excellent relationship between the United States and Austria.

Austrian Federal President Alexander Van der Bellen received the Secretary of State in the Hofburg for a discussion on bilateral and global issues. They spoke of the importance of multilateral cooperation particularly in fostering economic recovery after the pandemic, including increased trade and investment ties with Austria.

The Secretary went to the Holocaust memorial at the Judenplatz to lay a wreath in the name of the American people, 75 years after the liberation of the Mauthausen concentration camp by soldiers of the US Army. He did this in the presence of the Jewish Community President Oskar Deutsch and Cardinal Christoph Schönborn, and was accompanied by his wife, Susan J. Pompeo, and Ambassador Traina. 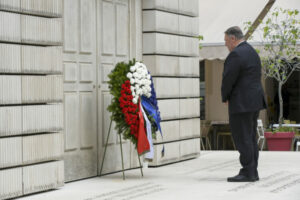 He next met with Foreign Minister Alexander Schallenberg at the Belvedere Palace, which was host to the signing of the Austrian State treaty in 1955. The Secretary said at a press avail after their meeting: “Austria is a trusted partner and a great friend, importantly, with the U.S., and perhaps equally importantly a true force for democratic ideals – free enterprise and stability – in the heart of Europe.”

The Secretary and Ambassador Jackie Wolcott talked with International Atomic Energy Agency Director General Rafael Grossi. They emphasized the importance of the IAEA’s activities during the COVID-19 pandemic, including its work in providing diagnostic kits to IAEA Member States and maintaining the IAEA’s global safeguards inspections regime. During a short break the Secretary, together with Ambassador James S. Gilmore, U.S. Mission to the OSCE,  Ambassador Jackie Wolcott, U.S. Mission to the International Organizations in Vienna , and Ambassador Trevor Traina, met with employees of the Tri-Missions Vienna. 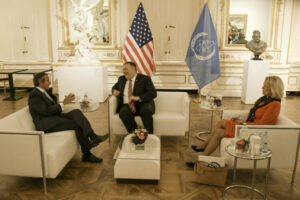 Later on, the Secretary met with Chancellor Sebastian Kurz. They had a fruitful conversation on the importance of the U.S.-Austrian bilateral relationship and how to increase U.S. trade and investment ties with Austria.