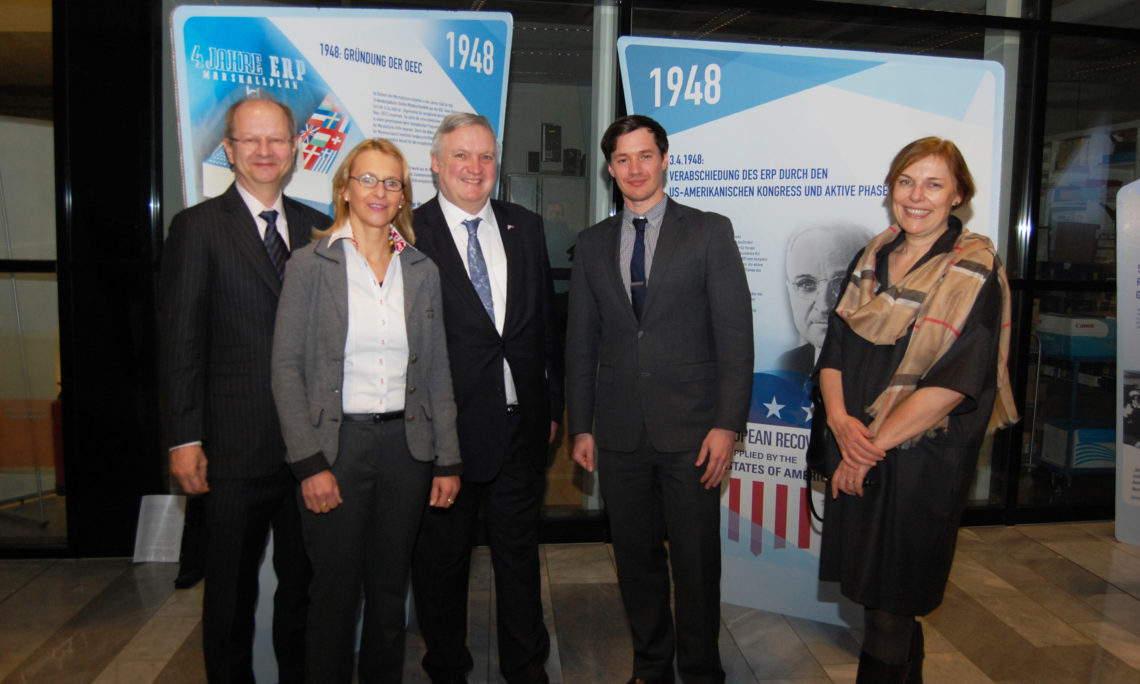 On March 1, the anniversary exhibit “70 Years Marshall Plan” opened at WKO Tirol. Dr. Karl Josef Ischia commended the United States for its foresightedness and generosity following the end of World War II. Mag. Barbara Traweger-Ravanelli mentioned the role of Tyrolean ERP inspector Dr. Walter Hörmann, whose daughter was also present at WKO, in monitoring ERP agricultural investments in the area. Cultural Attaché Nathanael Lynn mentioned earlier comments by Austrian President Alexander Van der Bellen that his home region received Marshall Plan aid. Dr. Hans Petschar, director of the picture archive of the Austrian National Library, outlined how precarious the Austrian situation was in the years immediately following WWII. If it had not been for the MP, he said, many Austrians would have starved. Petschar also provided a rundown of projects that had received aid, mentioning Hotel Europa in Innsbruck, the mountain road from Lech to Warth, and a number of cable cars in the Tyrol area. As to why the Marshall Plan has never been duplicated anywhere else, Petschar quoted a number of key factors that determined the success of the plan: the reconstruction of existing structures rather than building new ones; a functioning bureaucracy; an educated and well-trained work force; a democratic tradition; a population that was willing to buy into the system; and, last but not least, the absence of corruption.

Petschar also referred to the fact that the implementers of the plan had set aside a remarkable five percent of funds for promotional measures, such as the Train of Europe that toured Austria at the time as well as a number of Amerika Häuser where people could find information about the United States and its policies.
As early as 1950, exhibits documenting the Marshall Plan’s progress were put on in cities throughout Austria including Innsbruck, typically in combination with business fairs.

While the onset of the Korean War in1951 led to the re-direction of funds and somewhat limited the plan’s success, its effects on Europe just cannot be overestimated. It was the Marshall Plan that paved the ground for Austria’s later accession to the European Union while at the same time firming up the separation of Europe into two camps. Secretary of State George C. Marshall‘s conviction that the losing powers needed to be treated differently than they had been in 1918 /19, and his determination to involve civil society were central to the plan’s success and justly earned him the Nobel Peace Prize, said Petschar. Turning over the remaining funds in the amount of 11 billion ATS to the Republic of Austria in 1962 meant economic investments would continue. To this day, ERP loans worth €500 to €600 million annually are disbursed by austria wirtschafts service, which also commissioned the anniversary exhibit. In closing, Petschar underlined how, historically speaking, policies that provide a perspective of peace and prosperity to populations have been the most effective tools to counter totalitarian tendencies. In the case of Austria, it was „Hilfe zur Selbsthilfe“ that allowed the country to become one of the world’s richest nations 70 years later.